Writing down your goals is only half of the required work toward achieving your dreams. The other half, which is following through, is where the real struggle comes from. Today, I’m going to show you how a simple goal tracker layout can help you tackle your goals easily.

In this article, I’ll show you:

In the past, I used to only make New Year’s resolutions by merely creating a list of things I wish to achieve. However, without a tracking tool to go with my list, I realized that I wasn’t making any progress at all. To keep you from losing motivation as I did before, I want to share what I learned about accountability through using a goal tracker layout in bullet journaling.

What Is A Goal Tracker Layout?

A goal tracker layout is a bullet journal feature that lets you log and track your progress toward goal completion. It uses a tracker called a “progress bar”, where you can see how much work you’ve put in and how far along you are until your goal is accomplished.

Goal tracker layouts can monitor goal progression (or the lack of it) depending on how you want to measure your output. For instance, you can simply assess your progress by how many percent you’ve saved up towards your goal amount, which is at 100%.

Compared to weekly and monthly trackers, this layout is more practical in the long run as it doesn’t take up too many journal pages. It gives you an overview of your priority goals all in one bujo spread.

How the Goal Tracker Layout Helps in Achieving Your Goals

This goal tracker layout keeps you on track towards goal achievement by giving you a summary of goals you need to prioritize. Seeing them all on a single bujo spread helps sort out your thoughts and align them accordingly so you don’t feel swamped with things to do.

Unlike lists such as to-dos and New Year resolutions, a goal tracker keeps you accountable throughout the process. By monitoring your progress, you’ll stay motivated and on top of the game. In fact, a study revealed that goal visualization such as using progress bars enhances our commitment toward our goals 1.

A goal tracker layout is also preferred by most bullet journalers because it makes logging easier. All you need to do is shade a portion of the bar based on the percentage of output you’ve added toward the goal completion. In turn, the ease of use lets you better commit to your goals.

For those bullet journalers who are busy busting out their goals, having a printable PDF version of the goal tracker layout is a good way to save time. It helps you plot your goals right away without creating the entire layout from scratch.

Begin tracking your goals with this printable PDF designed for visual planners:

How to Make a Goal Tracker Layout in your journal? 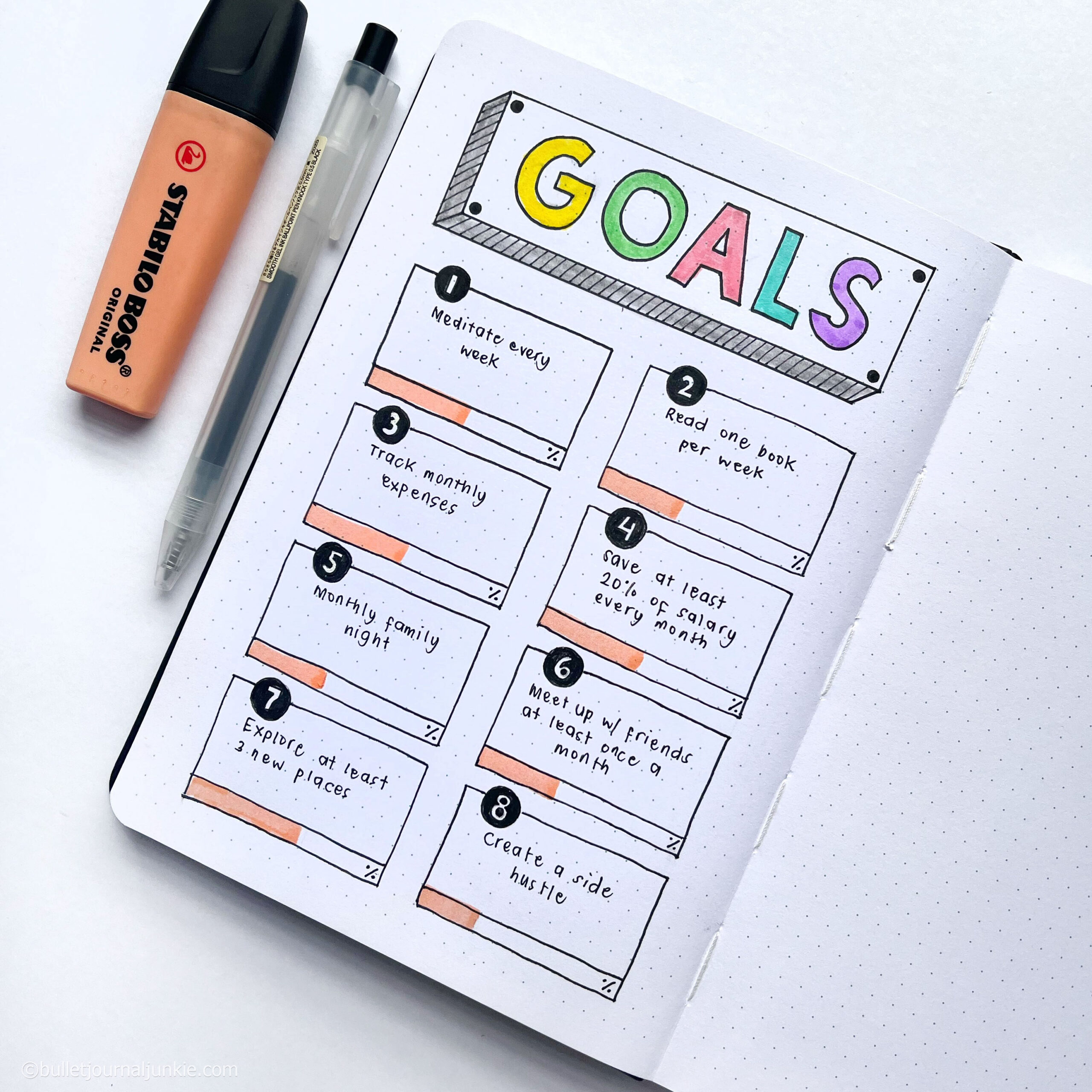 How to Make a Goal Tracker Layout in your journal 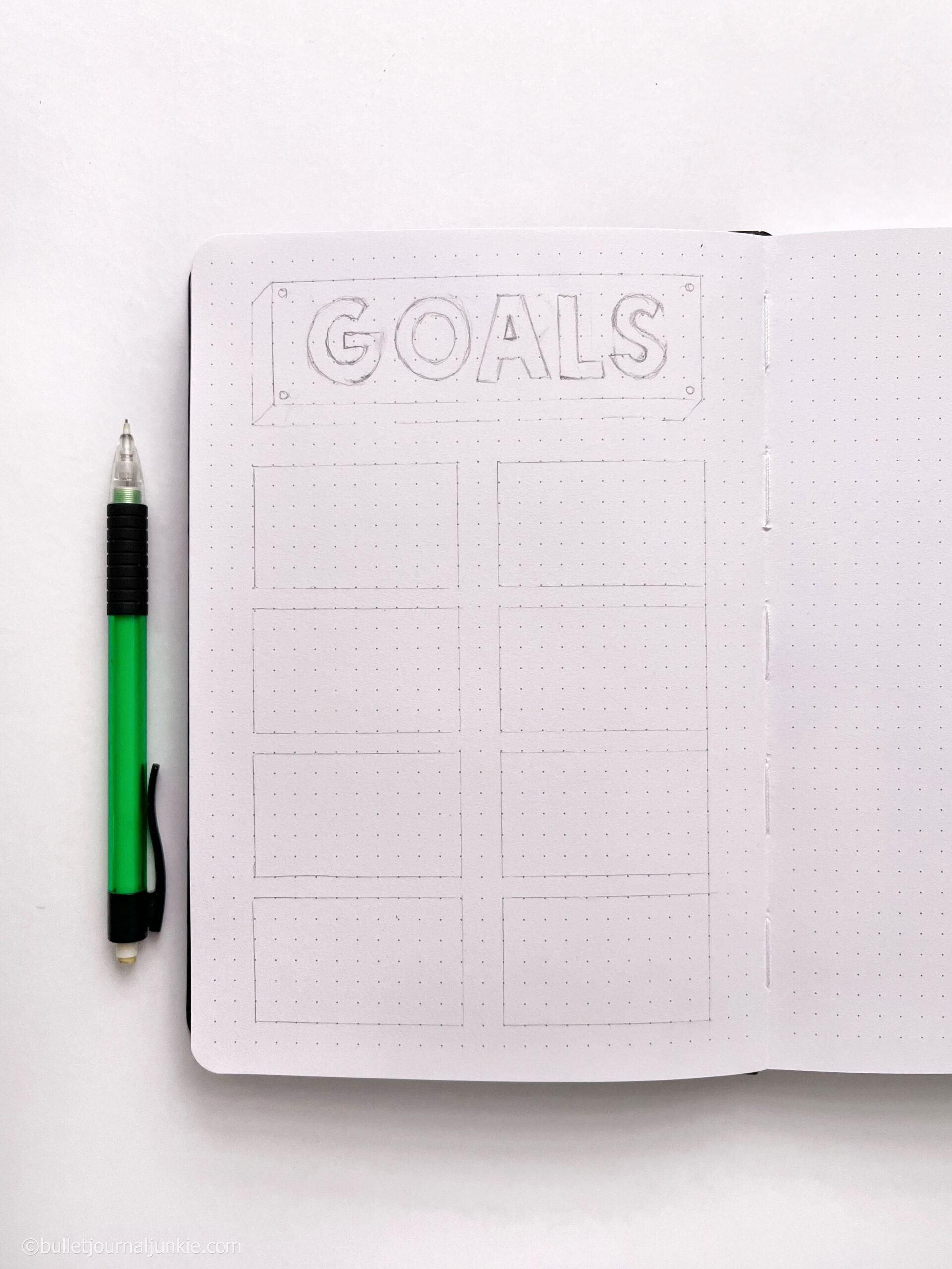 Depending on your goal categories and bujo dimensions, you should draw at least six or eight boxes of the same sizes using a pencil for light outlining. If you prefer more or less than this number, simply adjust the space to accommodate text input in each goal box.
Underneath each box, add a horizontal bar to serve as a tracker. Use a pencil first so you can erase the lines as you perfect the dimensions.

Trace the boxes with a ball-point pen 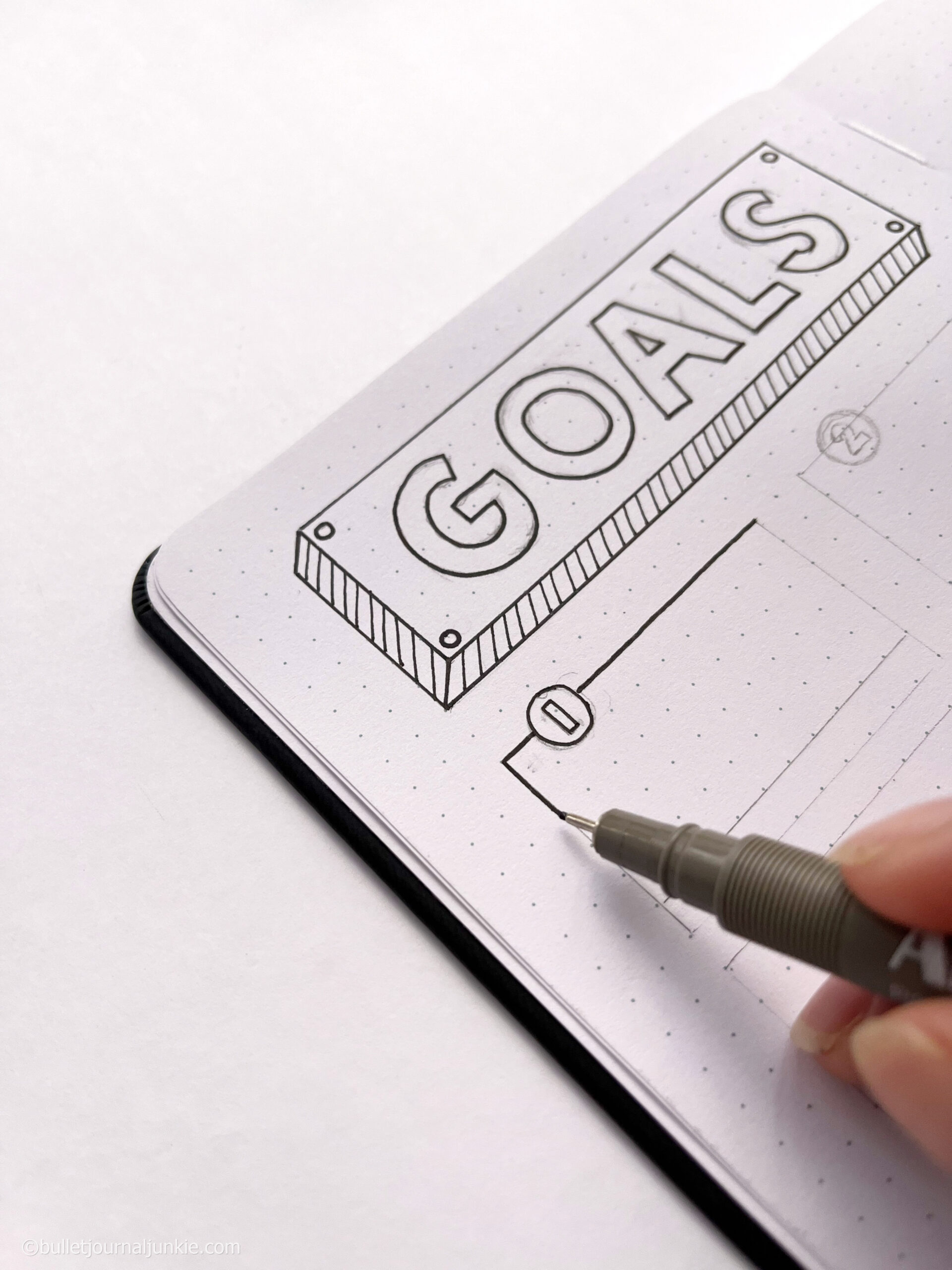 Make the box patterns permanent by lining them in ink. Erase the remaining pencil traces to clean the edges.

Add a number to each box 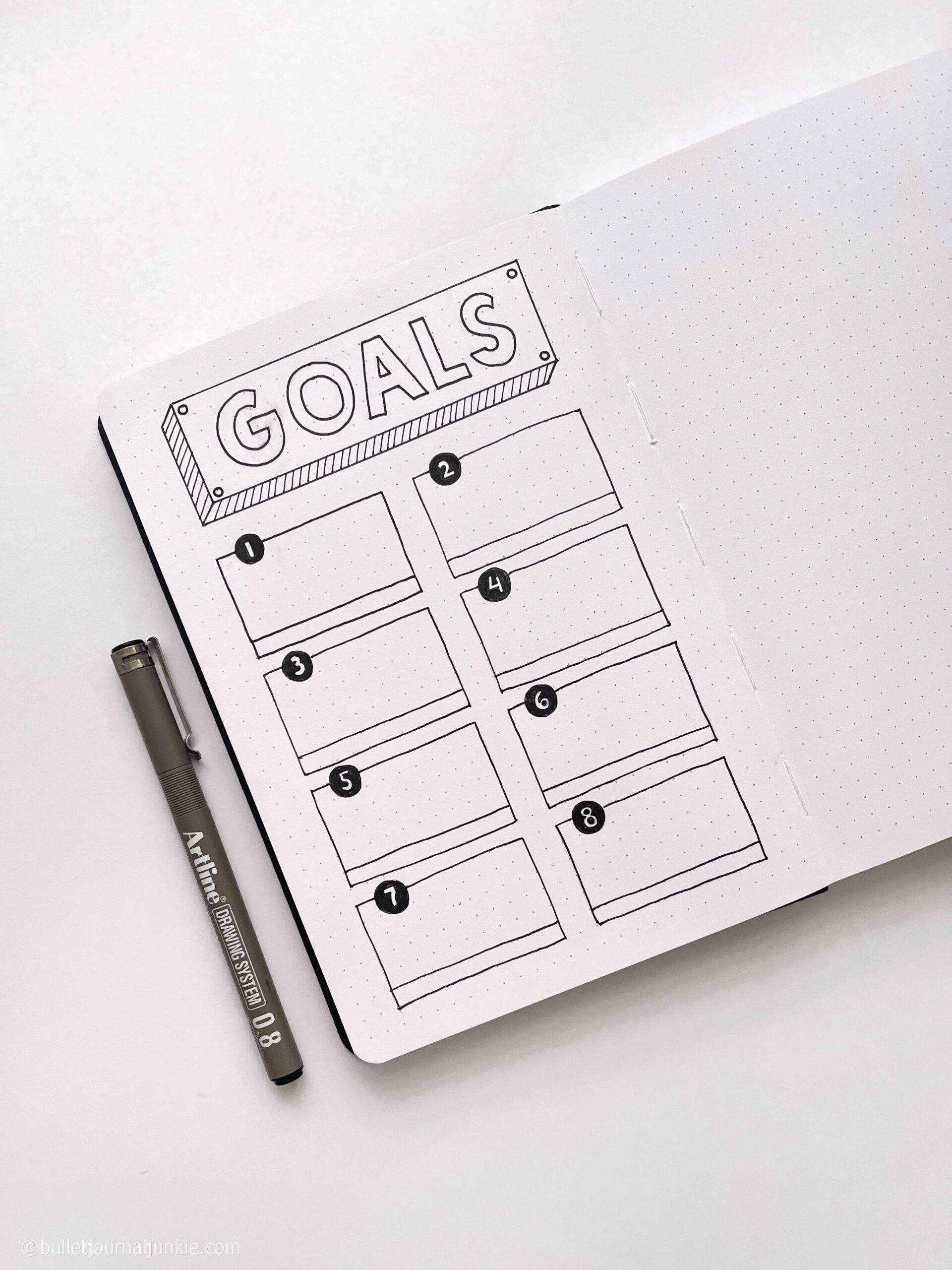 This will separate one goal from another and make progress tracking easier for each. If you prefer, you may arrange your goals in order of priority (1 being the most important and urgent goal, 2 being the next, and so on).

Above the boxes, title your goal tracker layout in huge lettering. I drew mine in all caps to make it stand out from the rest of the trackers I keep in my bullet journal. 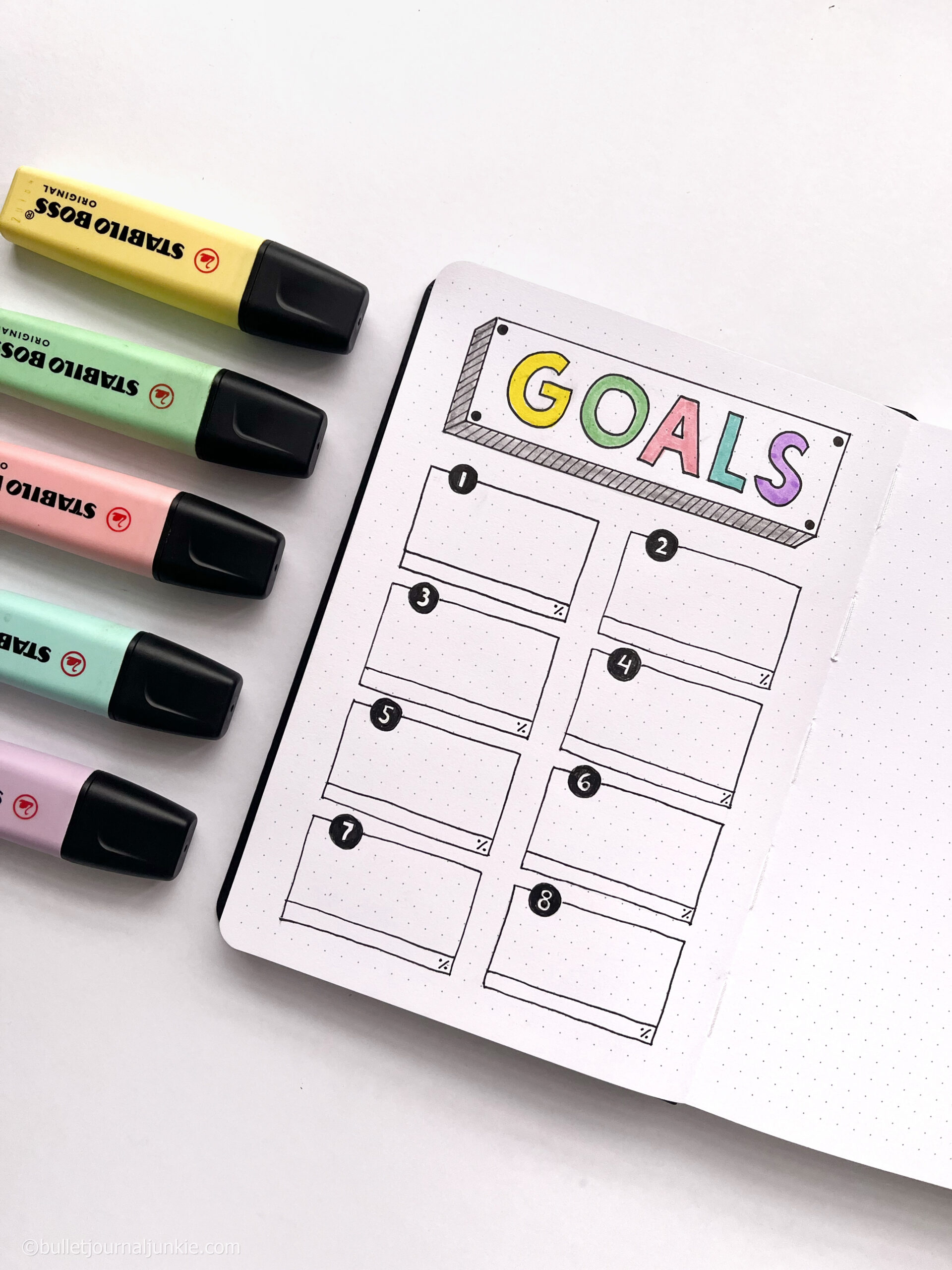 Use colored pens to make the page lively and motivating. Add stickers or draw doodles if you feel they can help remind you of your goals better.

Use a single-color highlighter pen for tracking 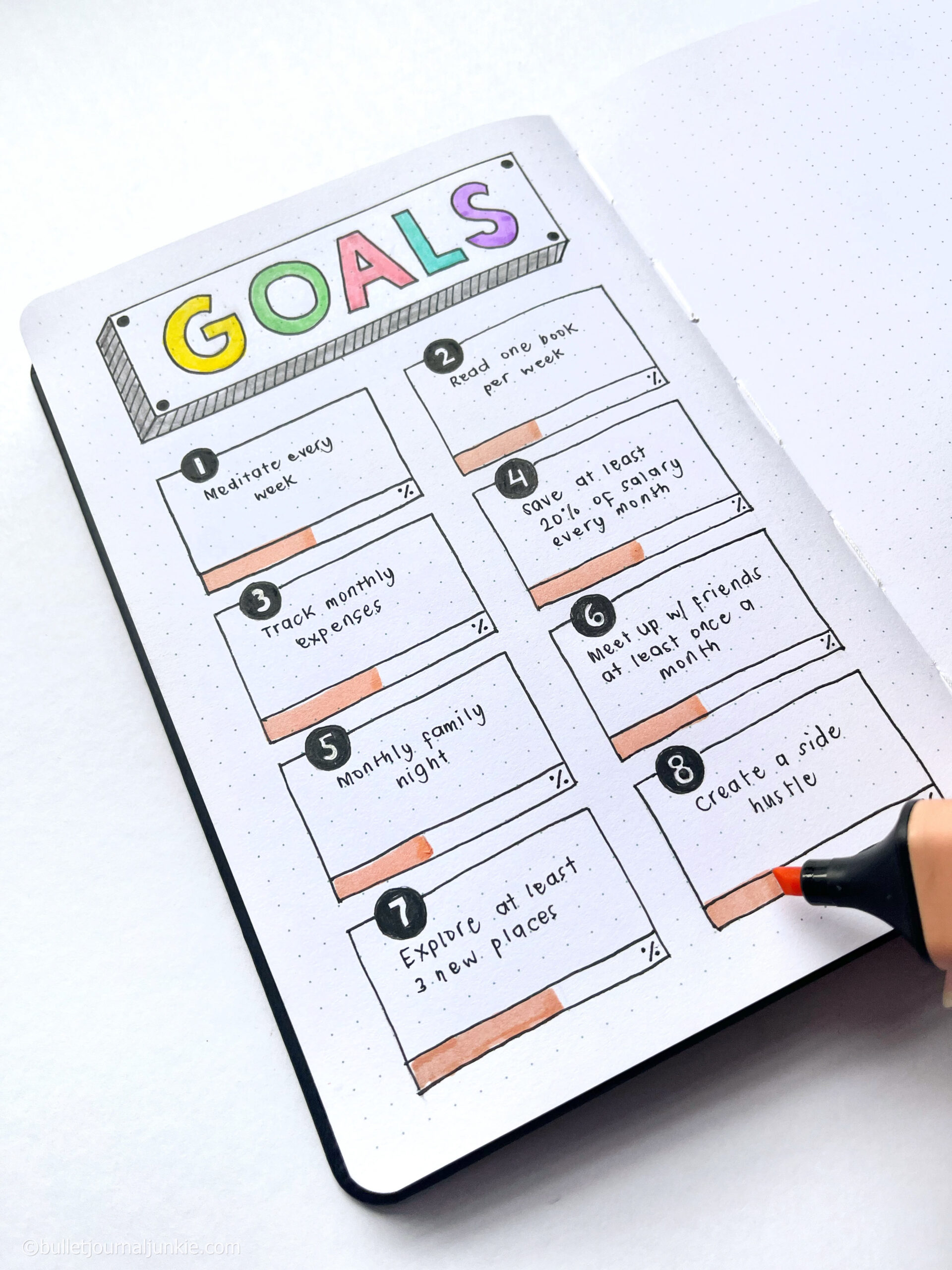 Whenever you make a progress on any of your goals, simply shade the tracker according to the percentage of output you’ve made so far. You can add to the progress by shading a portion each time until you’ve reached the bar’s end.

For my goal tracker layout, I used horizontal bars because it’s easier for me to monitor my progress the way a digital installation “loads” to “100% Complete”. But I’ve seen other journalers use vertical bars for tracking their progress on a table, which is great for long notebooks.

There are also those who find creative ways to track their goal progress. For instance, you can draw empty jars of equal sizes, which you’ll shade according to the percentage of your output at a given time. There would be a key next to the jars to indicate each goal represented by icons on their jar tags.

Still another variation of the goal tracker layout is the use of circle pie graphs for each goal. You can shade the circle by quarters to indicate your progress.

A goal tracker is most useful when you have plenty of goals but you want to keep them all in a single bullet journal spread. Not only it will help eliminate excessive paper usage, but also instantly give you an overview of all your goals for each area of your life.

How Often to Use Goal Tracker Layout in a Journal

You can use a goal tracker layout as often as necessary, especially each time you marked a goal (or two) as completed. This way, you can keep on excelling in all areas of your life that you can work out.

Where in Your Journal Should You Place Goal Tracker Layout

I suggest that you place your goal tracker layout at the beginning spread of your bullet journal. Since it will only require you to flip to the first few pages, you’ll likely increase your accountability rate whenever you land on the goal tracker spread. It will help remind you to work on your goals regularly until completion.

The goal tracker layout is still a popular feature for bullet journals in 2022 due to its ability to fully involve achievers with its creative progress trackers. In this article, you learned how to use the goal tracker for setting your intentions and progress monitoring, as well as how to make variations of this layout for personalization.

The image shows a bullet journal notebook opened on the page entitled “Goals” in all caps. On its left side is an orange Stabilo Boss highlighter pen and a ball-point pen.

The journal page’s title is shaded with different colors for each letter. It is framed inside a hand-drawn wooden signboard with four nails on each corner.

Below the title are eight boxes that are numbered accordingly in the upper left corners. Inside each box is a goal, with a tracker underneath which is shaded in orange to indicate the progress rate in percentage.